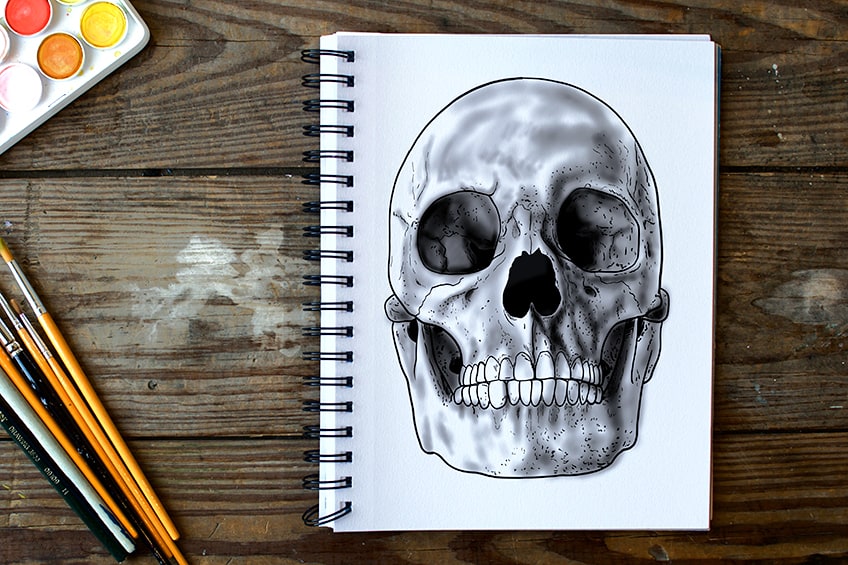 One of the most useful exercises for improving one’s art skills is to learn how to draw a skull. Human skull drawing can aid you in many ways when it comes to drawing various parts of the human head, and the skull itself will also elicit a lot of symbolism and meaning within your artwork. This tutorial will show you how to draw a human skull in just a few steps! Keep reading for an easy guide on how to draw a photorealistic human skull, compatible for painting, traditional drawing, and for drawing on a graphics tablet.

Why Draw a Skull?

You may be wondering why skulls are so popular in art. There are several reasons as to why this is so. Firstly, from a technical point of view, a human skull drawing offers great nuance in its complexity, complete with contrast, shading, and precision – this is no ordinary drawing subject. The skull is often depicted in a realistic way, and a skull drawing will allow the artist to get an in-depth understanding of their drawing subject. It has been said that the secret to mastering realism is to learn about the subject at hand’s internal mechanisms and structure, and you can do this with a skull drawing.

The major advantage here is that you will be getting a better understanding of how the body looks and works beneath that which is visible – our skin. You will see how the bones of your nose look in relation to your eye sockets, or your teeth when they are not being covered by your lips.

Being able to visualize the proportions of these elements and how they interact will improve your skills as an artist.

Without the knowledge of our anatomical foundations, you will find it very difficult to create a human face or head realistically. By learning how to draw a skull, not only will you find the act of sketching any part of the human face much easier, but the overall look of your art will also improve.

The skull has a rather somber meaning in that to see a human skull is to be reminded of one’s own mortality. Skulls represent death, the ephemerality of human life, the mortality of ourselves and others… However, in many other instances, the skull is also seen as a celebration of life, as a symbol of change and transformation, as well as a symbol of wealth, power, and strength. 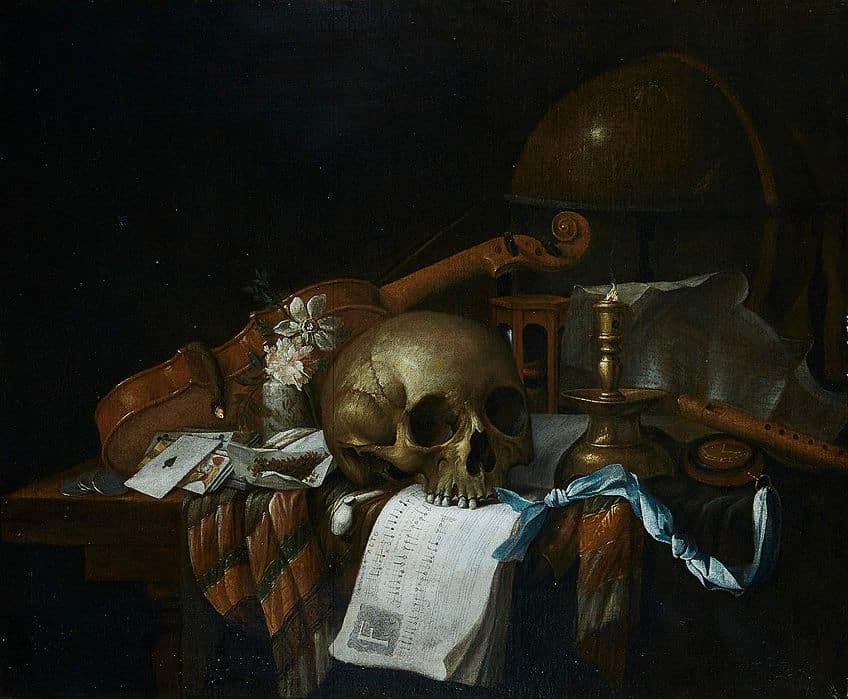 Skulls were particularly popular art subjects during the Vanitas period of the early 17th century. This period saw many Dutch artists begin to contemplate their mortality and the futility of life on earth, the essence of which was captured in a range of dimly lit still-life paintings. These paintings would almost always include a skull, as well as other varying symbols of death, transience, and wealth.

A Note on Proportions

Before we can begin with our skull drawing tutorial, it will be useful for you to have a basic understanding of the proportions of a human face. Naturally, these proportions will vary from person to person, but knowing the basics will help you to maintain balance in your drawing.

If you were to look at a human face straight on, you will notice that it is wider at the top and becomes narrower towards the chin, similar to that of an opal, or even an upside-down egg. In a skull sketch, you would only be drawing the sockets and not the eyes themselves. It is important to note that the eye will always be smaller than the socket. The following proportions will use the eye as the standard for measurement: 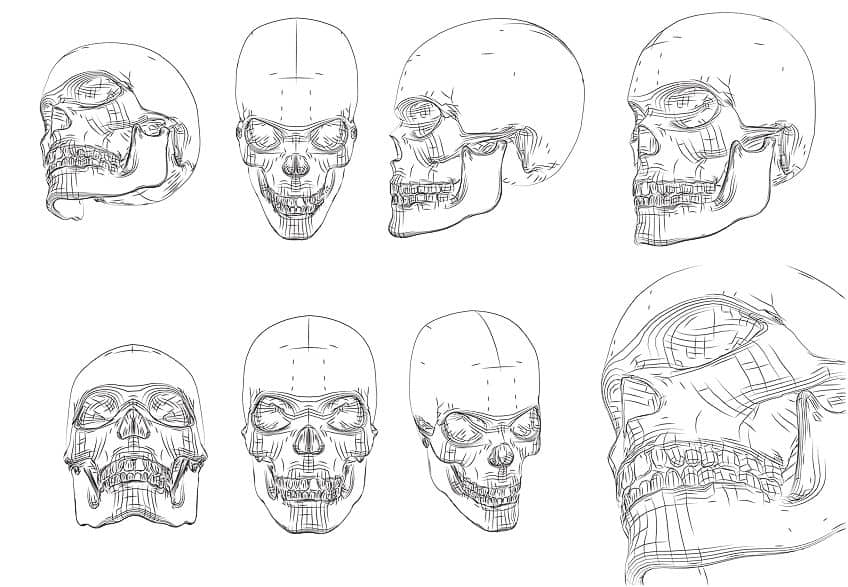 Step-By-Step Instructions on How to Draw a Skull

It is finally time to begin working on our human skull drawing! Below, we have included a list of materials you will need as well as the seven simple steps that stand between you and your perfect skull drawing.

In this step, we will find the center of our canvas and draw an oval shape vaguely resembling the width and shame of a human face and head. Use light construction lines for this and remember to leave some space at the top, bottom, and sides of the oval for future construction lines. 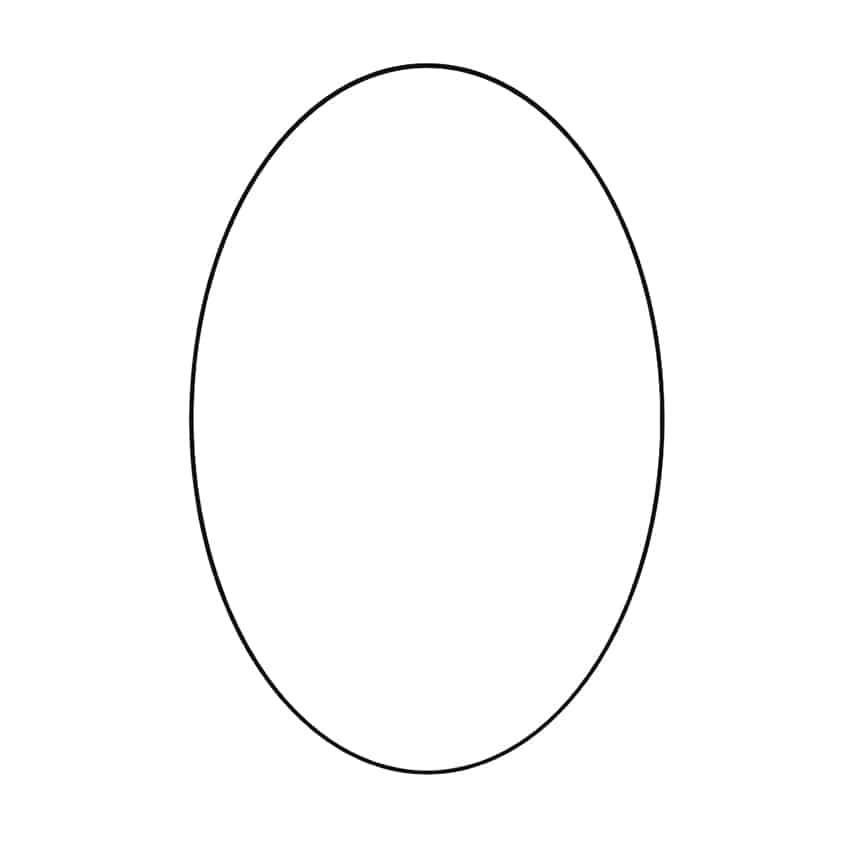 Here, we will begin dividing the face into separate parts in order to help us correctly place the eyes and nose in relation to each other. 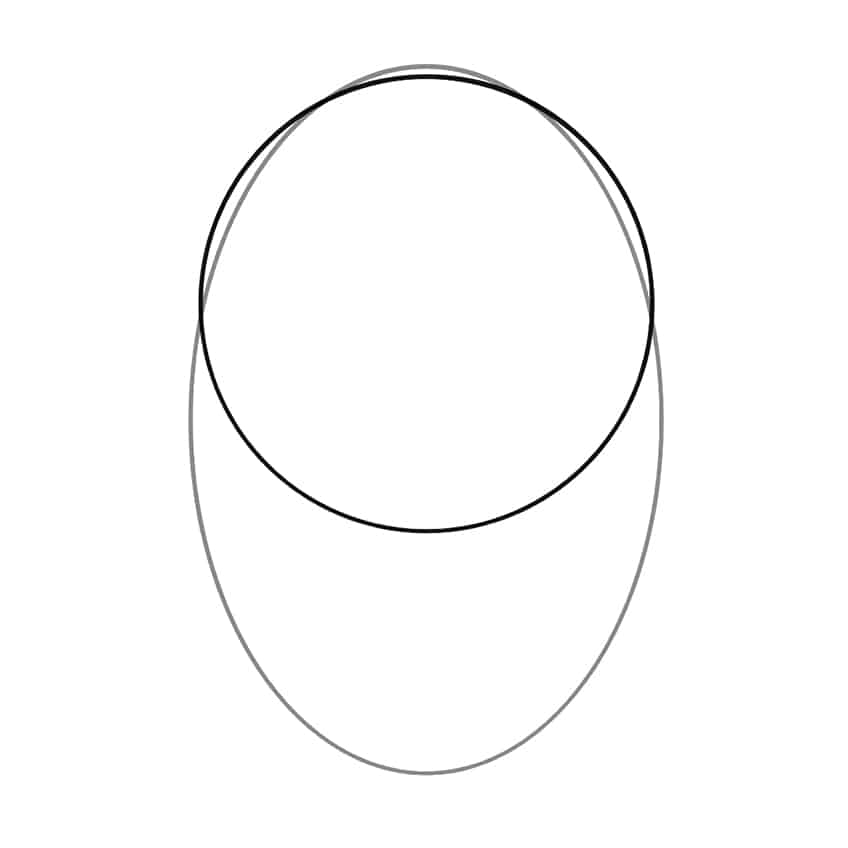 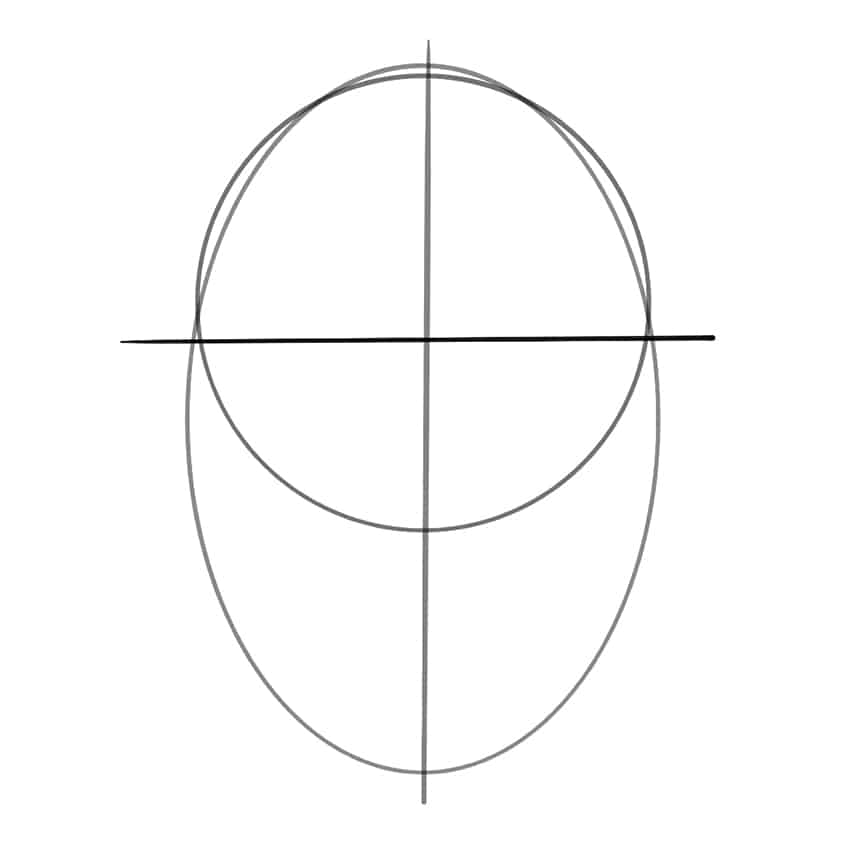 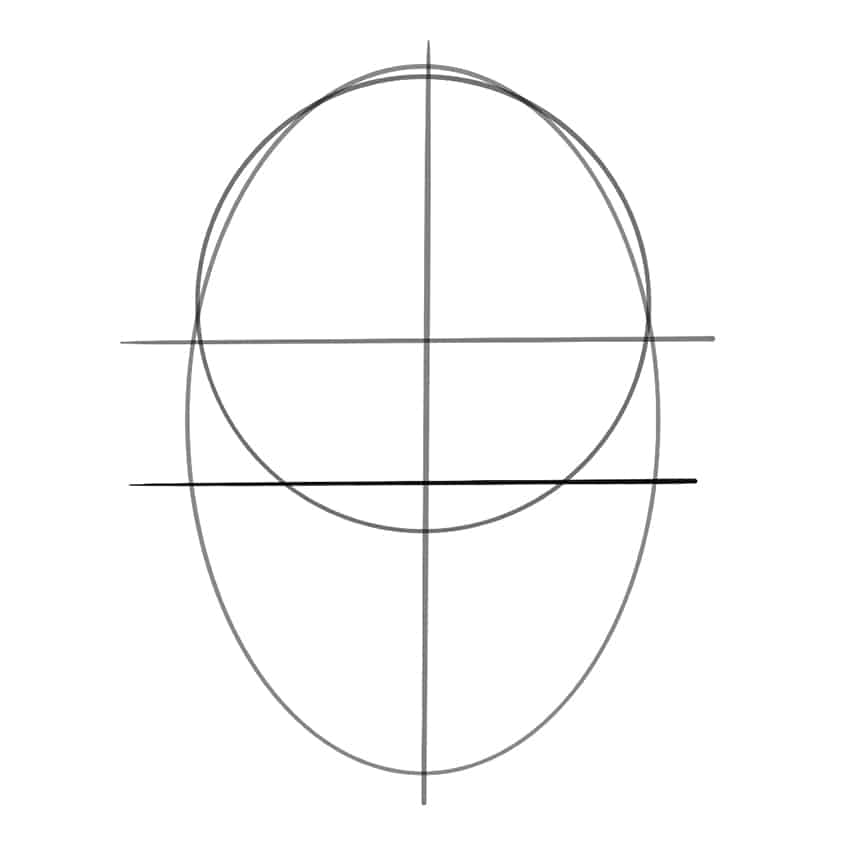 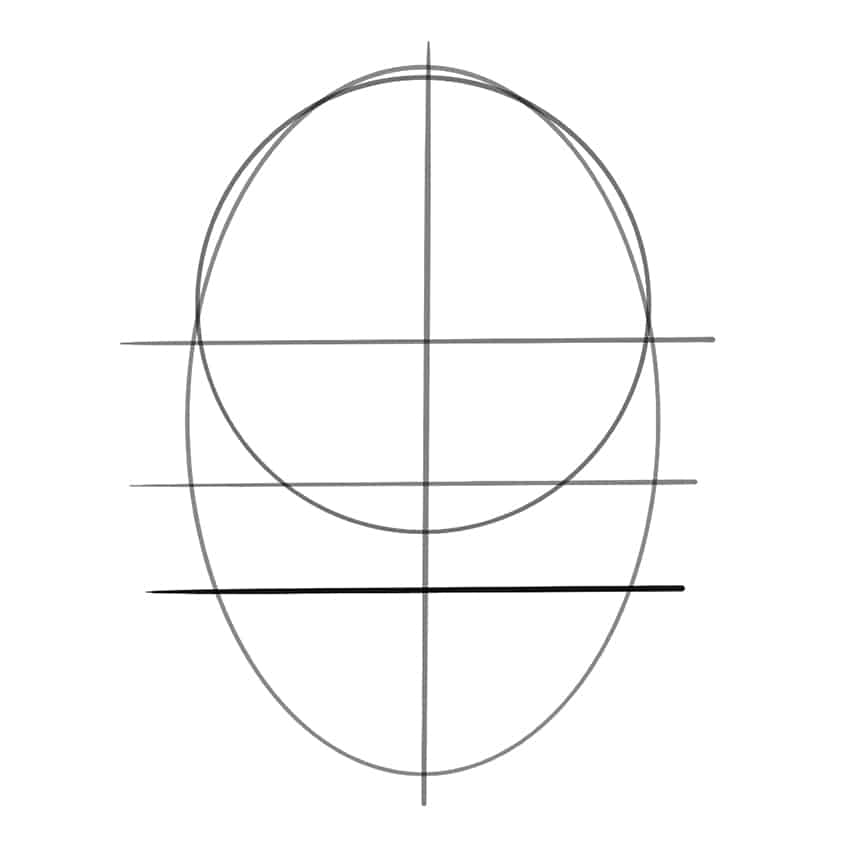 Step 3: Add the Eyes and Nose

We will now be sketching the eyes and nose. 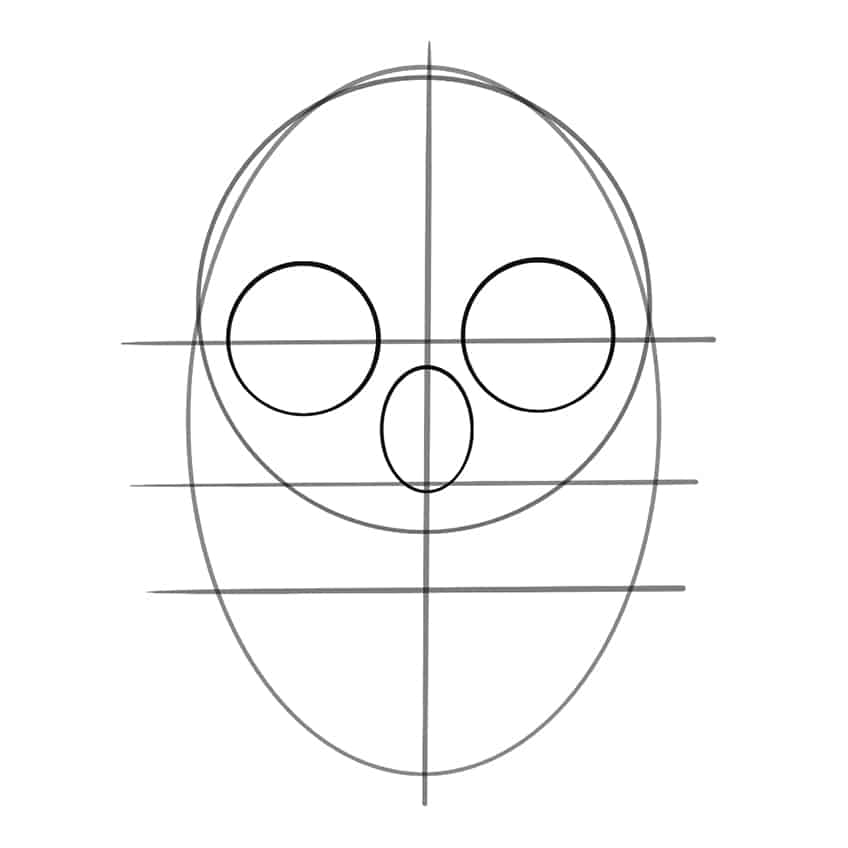 Step 4: Time for the Teeth

For this step, use the bottom horizontal line and vertical line (to aid symmetry) and start drawing an even number of circles, starting from smaller sizes on both sides to the middle, where the largest teeth will be. Do this for both the bottom and top layers of teeth. 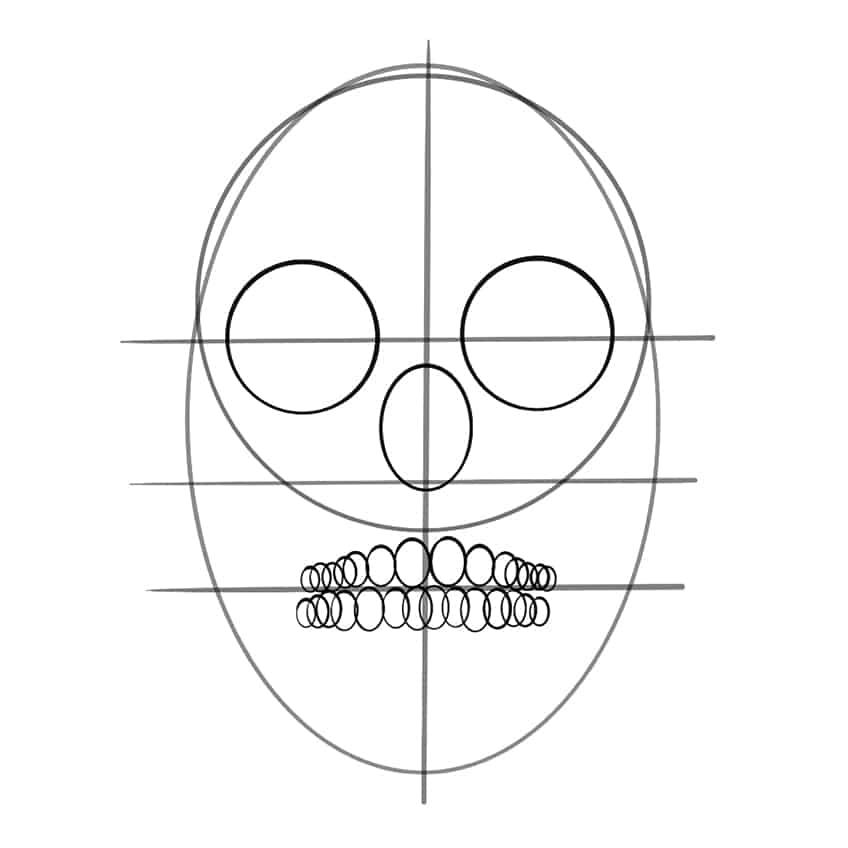 And now for the final basic foundations of your skull sketch – the shape and contour lines! While the basic shapes are great to begin with, your drawing will only begin to resemble a skull after refining it a little, which can be done by adding contour lines. 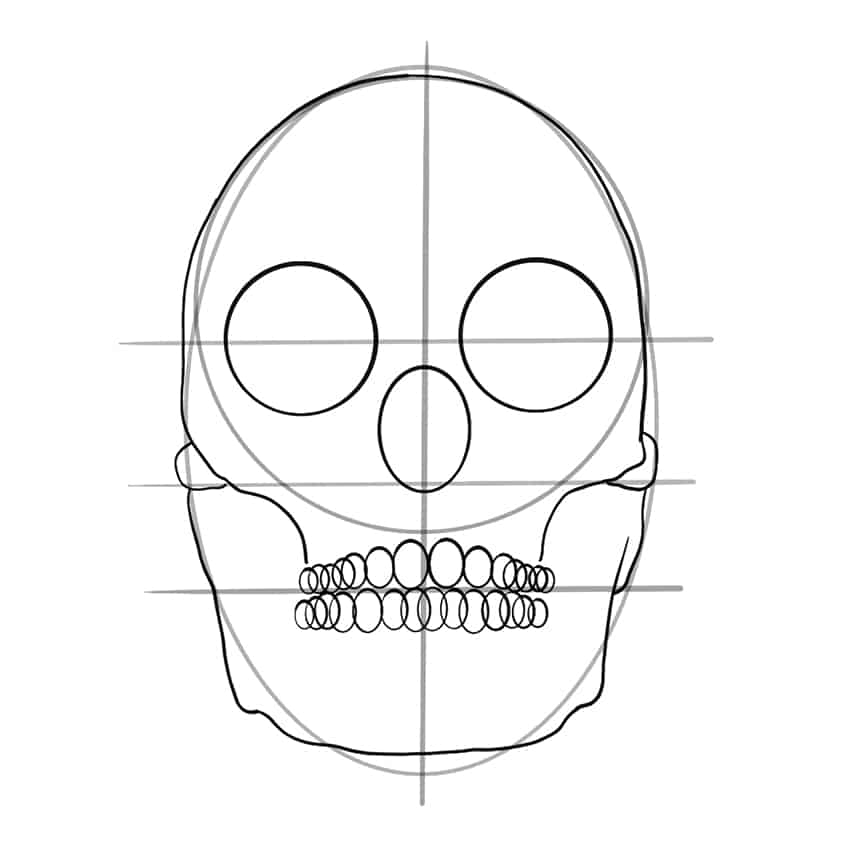 This is one of the most important stages of your skull drawing, as it is the foundations you set here that will determine the anatomical accuracy of your final drawing. Take a close look at your skull sketch and make observations: How big are the eyes and nose in relation to each other?  How many teeth are there, and how do they fit into the curve of the mouth? Taking the time to observe the basics here will result in a realistic human skull drawing later on.

In this step, you can begin to remove the construction lines and start adding details to all of the various elements of your skull drawing. You would use a darker pencil here. In this final step, we will be adding shading along the cracks and scratches we drew in the previous step. This will help us to achieve a bold, almost “raised” appearance, which will aid in creating realistic shading and highlights in relation to where the light source is. You will find that having several graphite pencils of various shades and thicknesses will be useful. 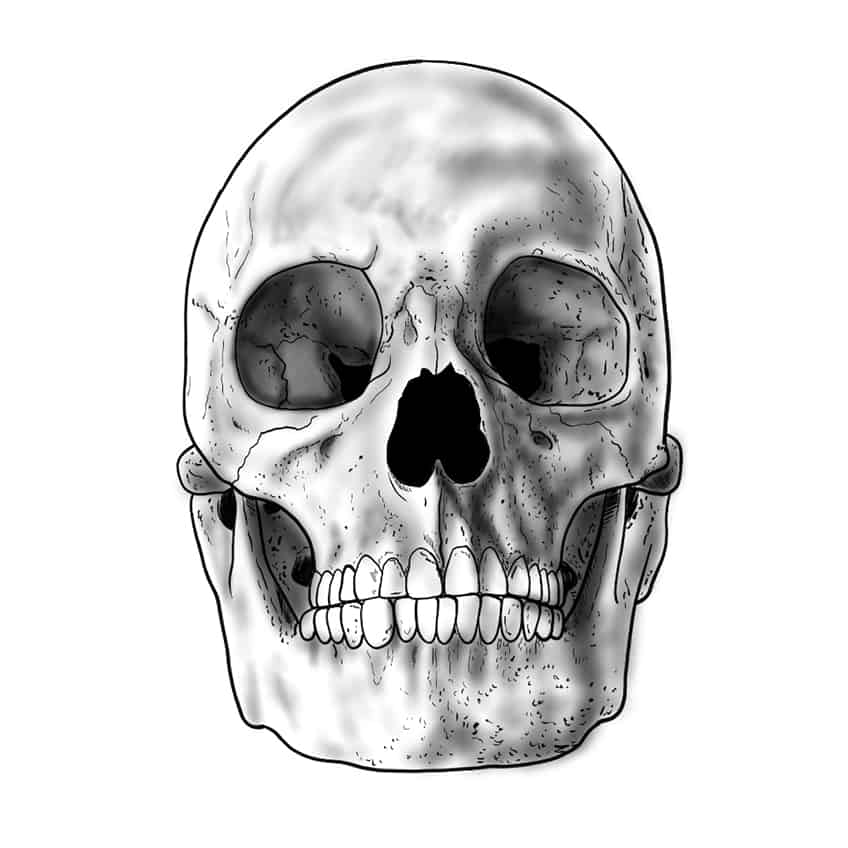 How to Draw a Skull from an Angled View

Foreshortening is an artist’s technique that works to create depth, dimension, and to increase the realism of a piece. Thus, the eye of the skull that is closest to the viewer will appear to be larger than the other, and the nose of your skull sketch will partially cover some of the eye on the farther side of the face.

It is therefore very important that you get these proportions right, and to ensure this, we recommend sketching some guiding lines before placing any eyes or the nose. The lines will simply be drawn from an angle as opposed to straight on, and as long as you are able to use these lines as a guide, you should have no problem creating a human skull drawing from an angled or off-centered viewpoint. 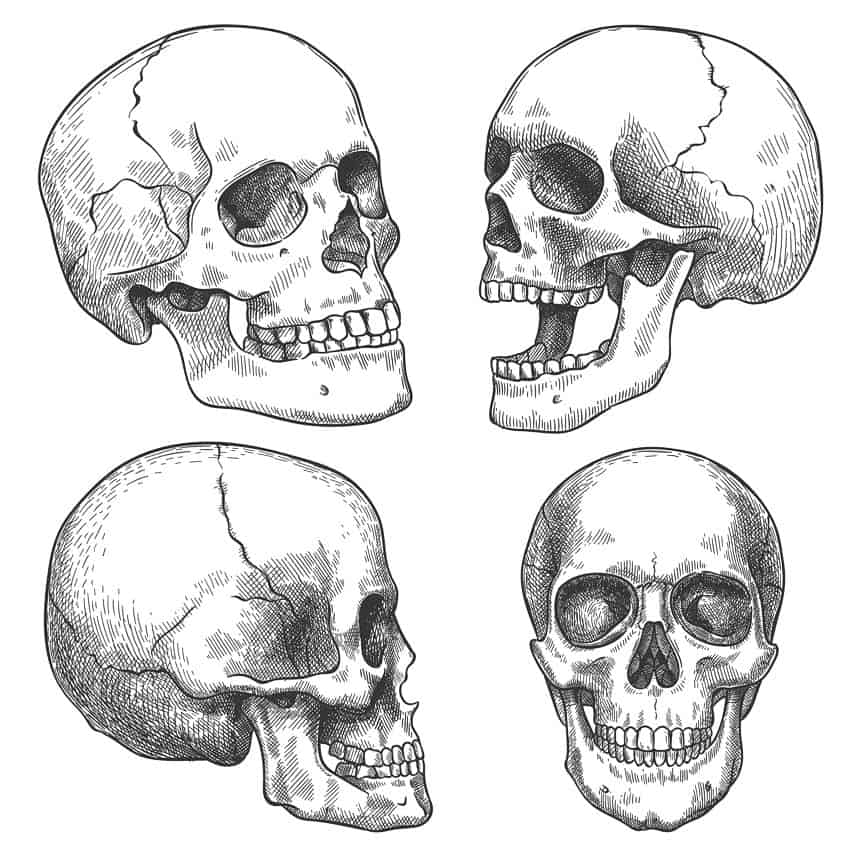 Tips and Tricks on How to Draw a Skull

If you are not familiar with an object you are drawing, try to use reference images or objects to aid your perspective and detailing.

Drawing is a skill, and skills can be improved upon through research and practice. That said, skulls are not too difficult to draw, as they have a simple shape, although they do require a great deal of precision, which means that they are a great way to practice achieving anatomical correctness in your drawings. Thus, skull drawing is a challenge for beginners looking to improve on their artistic abilities.

What Do Skull Drawings Symbolize in Art?

Skulls have been prevalent symbols throughout art history, making their greatest contribution to the Vanitas art movement. Skulls tend to represent the inevitability of death and the temporality of our short lives. However, skulls can also be used in conjunction with other objects to adjust their symbolism.

If you are new to the world of art or perhaps just have not paid much attention to the terminology used by artists, you may find yourself asking questions like, “what is a medium in art?” and” what types of art mediums exist?” The art materials used by an artist to create majestic works of… 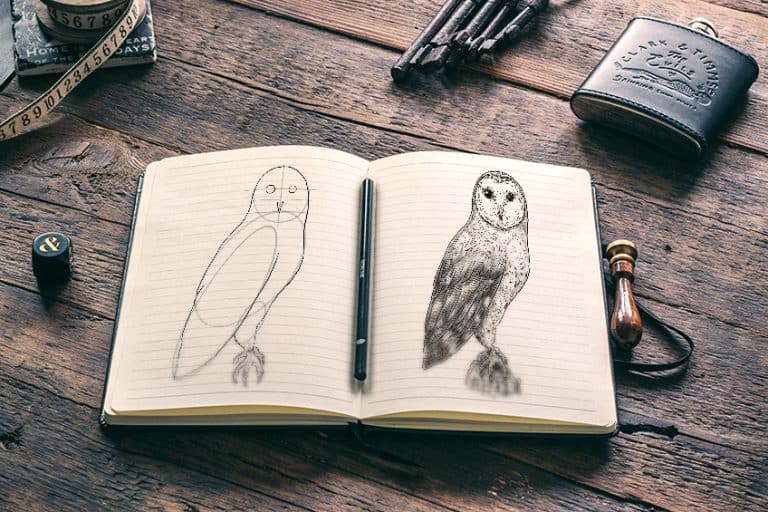 Owls are some of the most mysterious and majestic creatures we have on this planet. In many places in the world, it is very rare to see an owl. In this easy-to-follow drawing tutorial by our resident artist, we take you through all the most important stages in drawing a realistic owl. We have made… 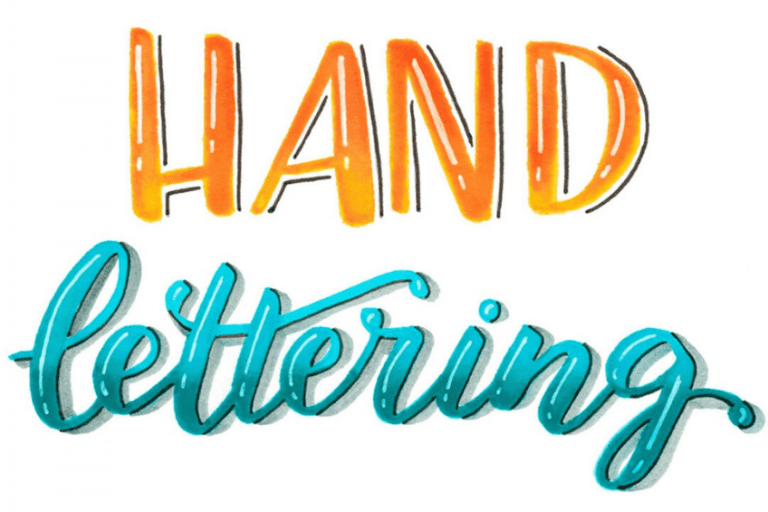 Hand lettering is the art of writing letters, words, and text in a particularly beautiful way. In this article, we will show you step by step how to learn decorative hand lettering for beginners, and how to create your own lettering as quickly as possible. We will also show you which materials you need for… 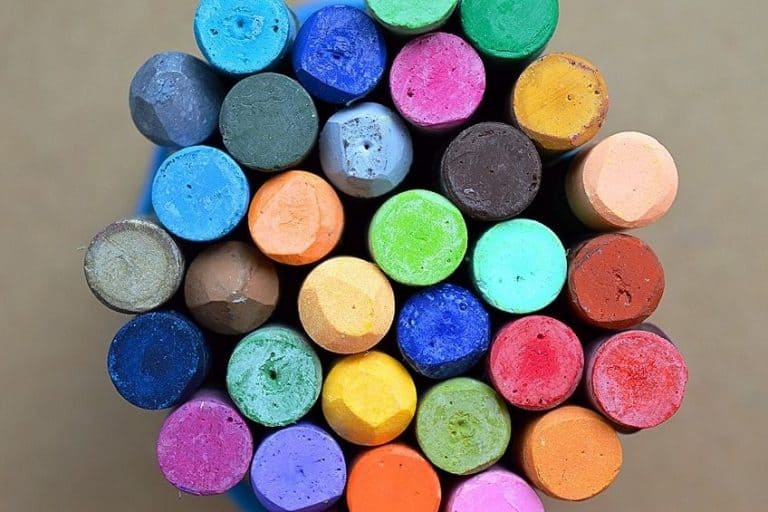 Many of you should be familiar with the use of certain pastels or oil crayons, you may have used them in the classroom, at school, or just around the house. These types of pastels are easy to use, however, when it comes to any art medium, it requires practice, technique, and knowledge to become skillful… 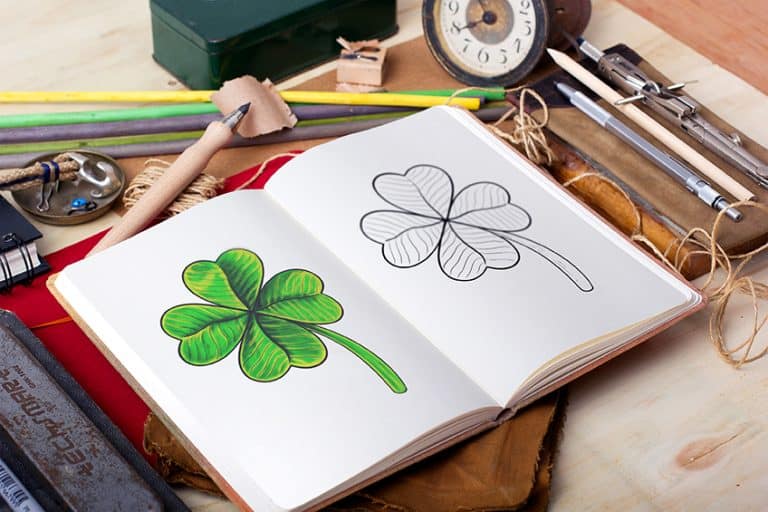 The four-leaf clover, also known as a shamrock, is a well-known symbol. Representative of luck, faith, hope, and love, it is also the emblem of St Patrick’s Day. Have you ever found one of these rare little leaves? Today, we will show you how to draw a four-leaf clover in an easy-to-follow step-by-step guide. So,… 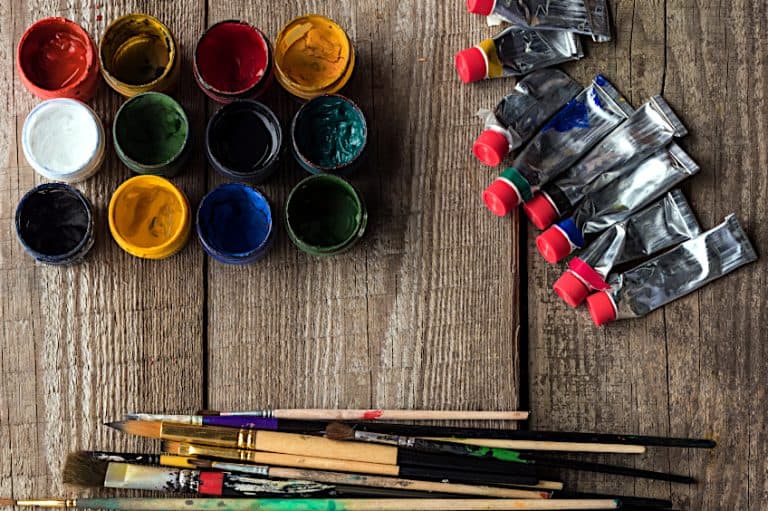 Beyond the pure delight of creating a painting, there is a body of knowledge in the creation of the medium itself. We might consider the creation of paints to hold a certain science behind the painting practice. What really is the difference between gouache and acrylic? Although they may seem similar in many ways –… 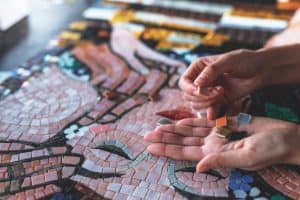 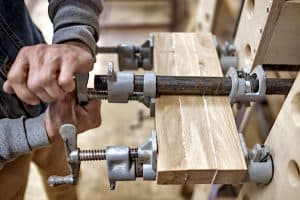 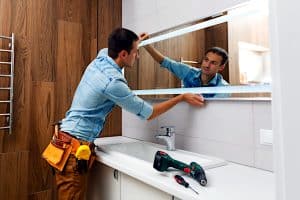